Lenovo’s new PC for artists - check it out!

Lenovo has just released a new computer aimed for artists and designers – the Yoga A940. And its pretty cool! It has a very unique design compared to normal desktops and all-in-ones and has a screen which you can pull down into a drafting-table-like position and half a base.

The computer comes with a clear 27-inch 4K display which is fitted to end in line with the right end of the hinge of the base. This base too only extends to about two-thirds of the width of the huge screen from the left edge and what continues is a thin pad. This may seem odd at first but you realise its for storing your mouse when using the A940 like a tablet or your stylus when using it like an iMac, and can wirelessly charge your phone too – pretty cool :)

The form of this PC follows a more functional and practical approach and this is also why there’s a notch taken out of the top of the based as this is where you pop your keyboard when you draw down the screen into drawing mode. We found this made switching between modes as effortless as possible.

This practical approach even extends to the placement of the speakers. When upright the A940 has a full Dolby Atmos Speaker System through the base but when in drawing mode, there are two speakers at the front of the screen that aim to make up for the blocking effect of the screen – great stuff. 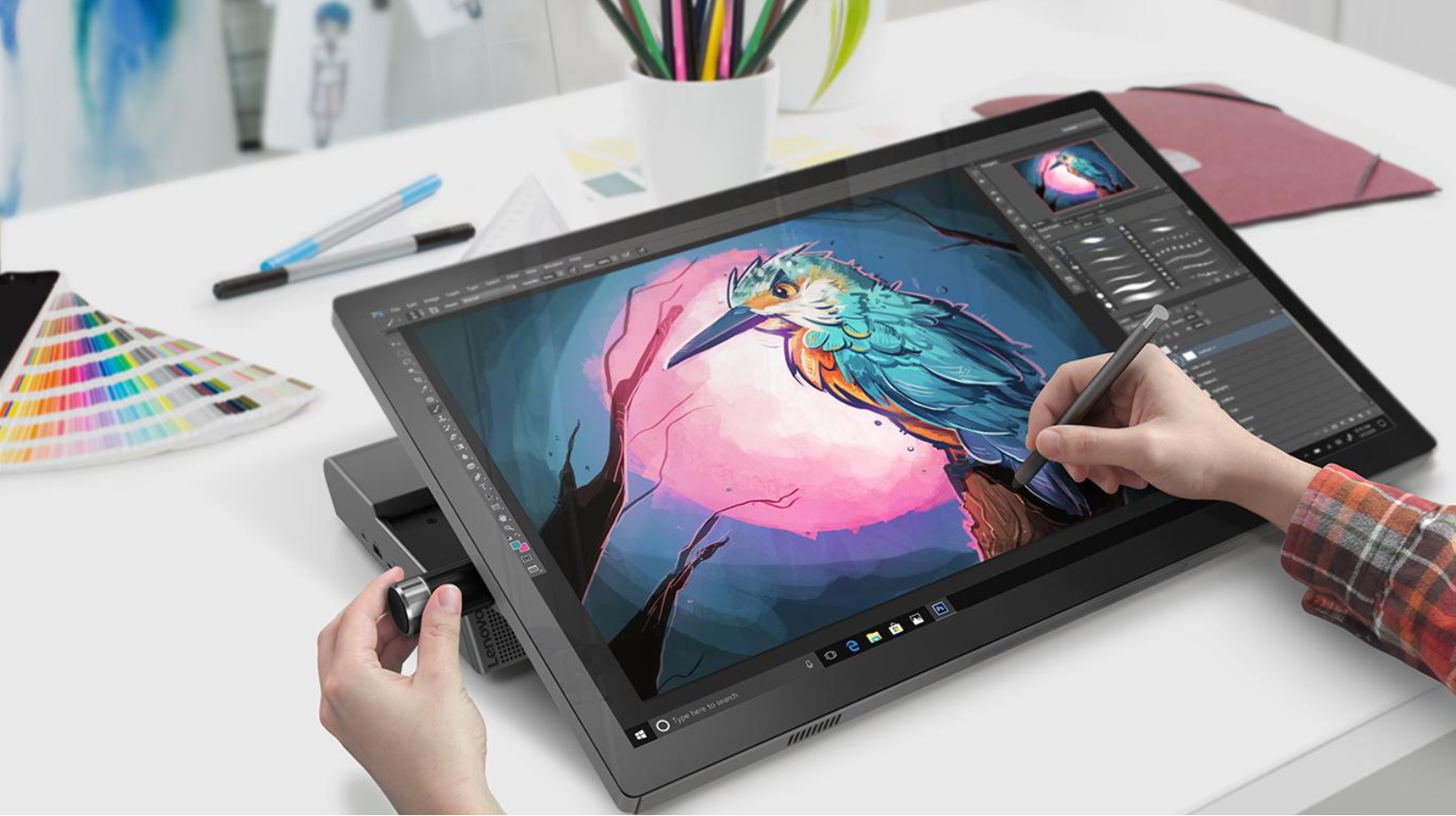 Whereas Microsoft’s Surface Studio has the surface dial that you can use on-screen, the Yoga A940 has the Lenovo Precision Dial which clips to either the left or right side of the screen yep that’s right you can change the position depending on which hand you are. And the dial is designed to rotate to let you adjust parameters in your apps such as brush size or opacity. The dial even works with Adobe Illustrator, Photoshop and Lightroom – plus Microsoft Office Apps.

It was fun to use Lenovo's Precision Dial to quickly control settings like brush size and swap tools while editing and sketching. Unlike Microsoft's magnetic Surface Dial, Lenovo's is a dongle that plugs into a USB A port on either hinge as mentioned. I like that this frees up space on your screen and won't get in the way, but I must admit I had some trouble figuring out which was the right way up to plug in the dongle. Thankfully, you most likely won't be removing the Precision Dial once you insert it, so hopefully this wouldn’t be too frustrating. 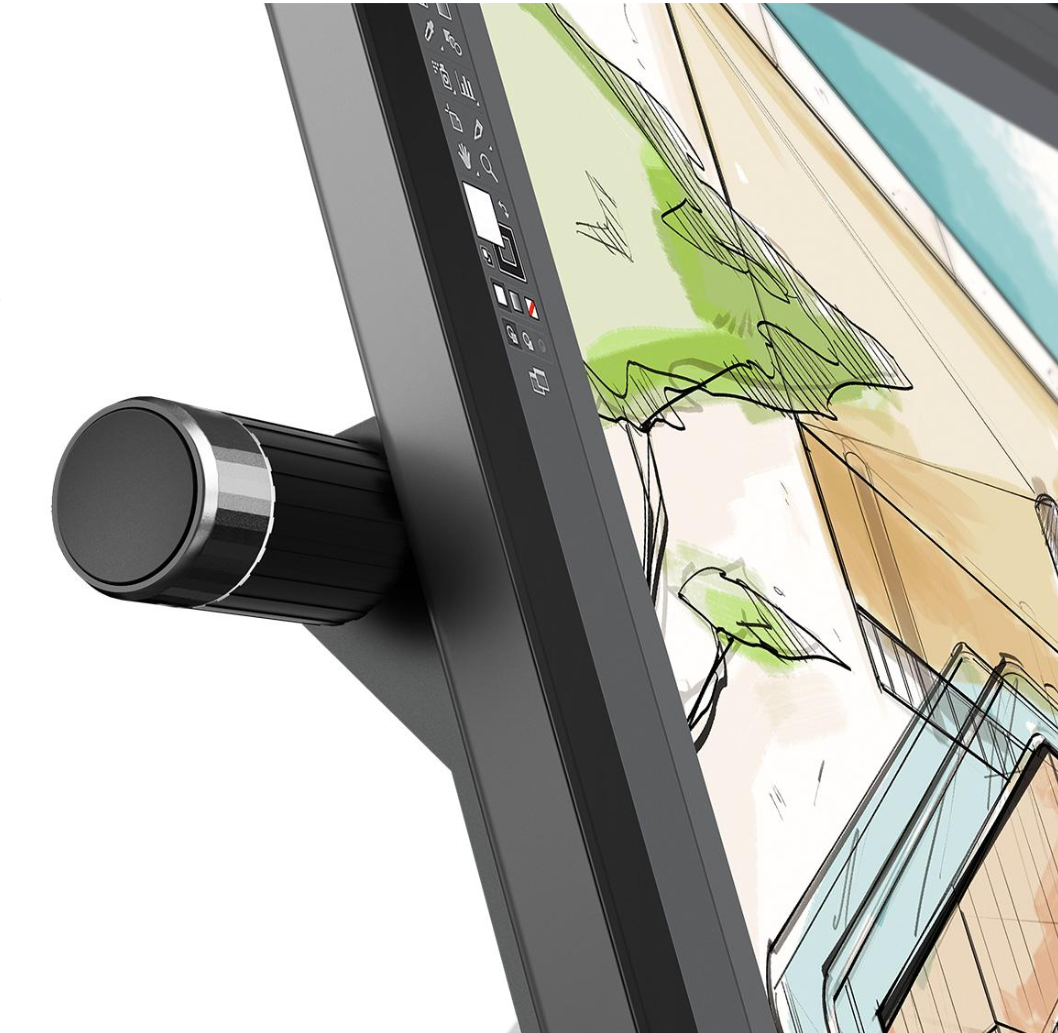 The screen itself too is a 27-inch 4K (3840x2160) IPS display. On Lenovo’s site the company claims it can output 100% RGB, by which we assume it means 100% Adobe RGB. Even still the screen is clear and sharp making it a great surface to draw on. The back of the PC contains a Thunderbolt 3, four USB 3.0 ports, ethernet and an HDMI port. The side additionally has two USB 2.0 ports, a card reader and a big power button that’s looks big and old school.

It was relatively easy to shift the display to different positions, though Lenovo’s dual-hinge didn't feel as smooth as the Studio's from my experience. The touchscreen did register the edge of my palm as a brush stroke, unfortunately, so I still had to be quite careful with how I placed my hand on the device.

Lenovo also include the Active Pen, which worked smoothly on the Yoga A940, though it dragged a little on the screen. Speaking of, the 27-inch 4K display was bright and bold as we edited pictures of wildlife in Photoshop – which actually came out great.

The dial has two rotating rings and a button at the top, giving users plenty of options to play with. Pressing down on the middle button will show you the shortcut options for the app you're using, and a LED ring on the dial will glow in a colour that corresponds with the app you are using – very cool.

Another thing we thought was good too is how the Yoga A940 has been designed to facilitate a tidy workspace. Which many artists can appreciate. As mentioned before, Lenovo built a tray into the computer's base, so you can tuck your keyboard away before pulling the screen down towards you. This way, you don't have to look for space on your table to put your keyboard when you're trying to draw. There's also an integrated wireless charging dock for your compatible smartphones and a slot to hold your Active Pen so you won't misplace it – neat :) 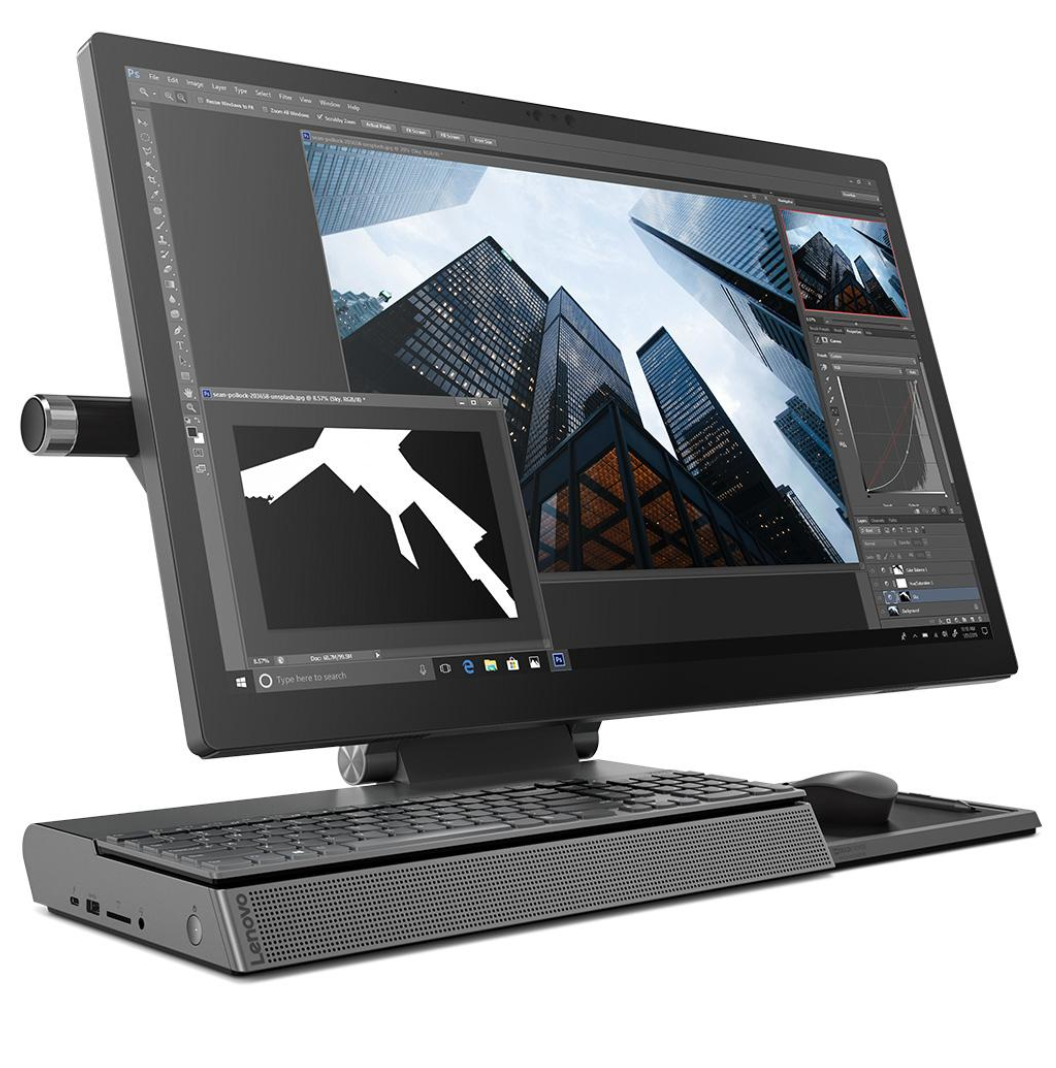 All in all, we found this all-in-one pretty impressive certainly a competitor to Microsoft’s Surface Studio and a great, stylist computer for any artist and designer that loves a practical approach to drawing and designing. The fact that is so neat to store away your peripherals and carry on drawing and being creative we found was great. The huge 4k screen is bright and clear and beautiful to draw on especially when you draw it down into drawing mode. All in all, we loved it from its great specs to unique design and think many artists and designers will do too.

Sajan and the SmartArt Team :)